LTE technology shortly before its launch

The 4G network provides much faster speeds than those offered by the current UMTS/HSPA (Universal Mobile Telecommunications System/High Speed Packet Access) networks. From the first phase of development, users of mobile data benefit from data rates of up to 100 Mbit/s for downlinks (e.g. web browsing) and up to 50 Mbit/s for uplinks (e.g. downloading photos). The IP Round-Trip Time is reduced to around 10 ms, in comparison with 100-200 ms for GSM/GPRS (Global System for Mobile Communications/General Packet Radio Access) and 30-40 ms for UMTS.

How does LTE technology work?

LTE technology uses radio frequencies of different frequency ranges. In Luxembourg, the regulator has specified the following spectra: 800 MHz, 1800 MHz and 2.6 GHz. The introduction of a complete ESP (Evolved Packet System) network infrastructure also enables faster speeds. This infrastructure is made up of 2 large blocks:

The EPC (Evolved Packet Core) system is installed on the network. It consists of the MME (Mobility Management Entity) and the S-GW (Serving GateWay). The S-GW transfers packet data to the eNB and the P-GW (Packet GateWay) as a connection to external packet data networks (Internet).

Individual users can monitor their speed and usage through functions offered by the EPC. These features can be enjoyed through a policy server (PCRF, Policy and Charging Rules Function). For example, the user's data transfer rates can be reduced when they exceed a specified monthly data allowance. Users are still registered in a database, which is expanded from the GSM's known HLR (Home Location Register) to an HSS (Home Subscriber Server), where user data and profiles are managed.

What are the main components of the 4G network?

The main components of the 4G network are presented in the diagram below in simplified form. 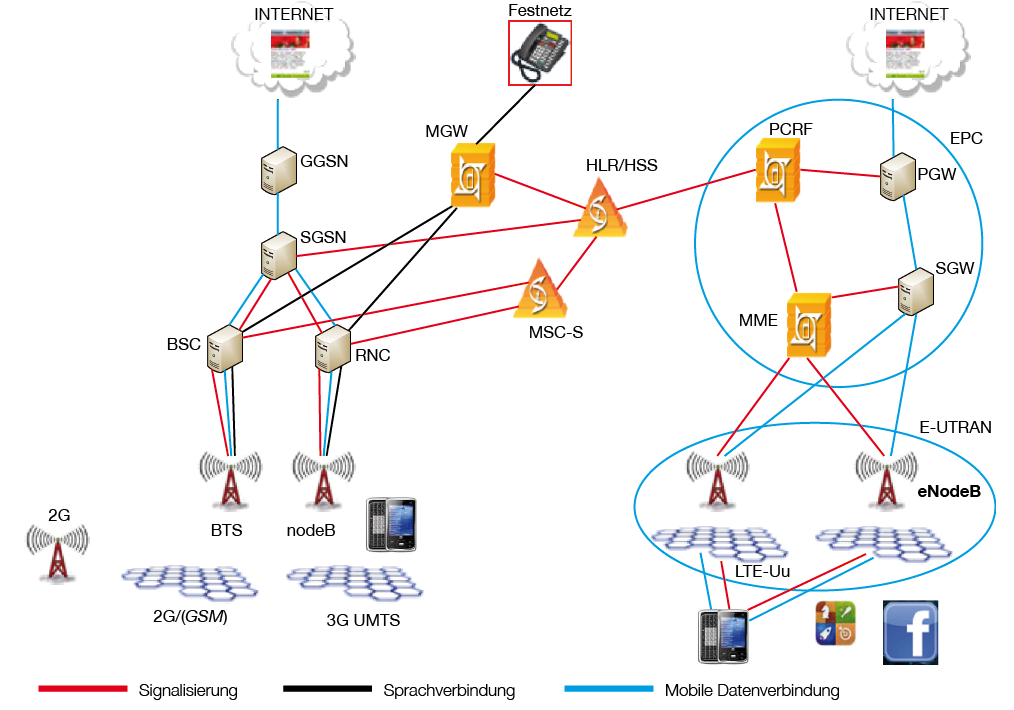 The link with existing telephone infrastructures (such as landlines) is made through the MSS (Mobile Softswitch Solution) system. As the network is set up as an ‘All IP Network', the known GSM/UMTS concentrators are no longer used (BSC/RNC, Base Station Controller/Radio Network Controller) for the radio network. In the current implementation phase, ENB and EPC allow basic data traffic between a mobile device and the packet data network (Internet).
If the customer wishes to make a call with the LTE end terminal, the transfer will be made from the 4G network to the GSM or UMTS network. The call can only be made by circuit switching through a technology known as CSFB (Circuit Switched FallBack). This is a temporary solution. LTE was originally designed as a basic data network. In the future, basic IP voice traffic will also be possible thanks to VoLTE (Voice over LTE) technology.